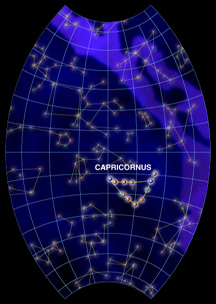 The constellation Capricornus represents the figure of either a goat or a sea-goat in the sky. Capricornus is also a member of the Zodiac, a special group of constellations that the Sun travels through every year.

There are many different myths about this dim constellation. Some believed that Capricornus was the Gate of the Gods, a region in the sky where souls passed when humans died. Most people saw a figure of a goat or even a sea-goat. A sea-goat was part goat, part fish.

In Greek myth, Capricornus was associated with Pan. During a picnic, a monster attacked the gods. The gods turned themselves into animals and fled, but Pan couldn't decide what to be. Finally, he jumped into the Nile River, at which point he transformed. His lower half was in water, so it became a fish. However, his upper-half was still dry, so it stayed a goat.

Capricornus is one of the dimmest constellations and does not contain very many celestial objects. It does have one globular cluster. It is easiest to see Capricornus in September. You will find it below Aquarius and next to Aquila.