Ozone does occur naturally at ground-level in low concentrations. The two major sources of natural ground-level ozone are hydrocarbons, which are released by plants and soil, and small amounts of stratospheric ozone, which occasionally migrate down to the Earth's surface. Neither of these sources contributes enough ozone to be considered a threat to the health of humans or the environment.

Ozone that is a byproduct of certain human activities does become a problem at ground level and this is what we think of as 'bad' ozone. With increasing populations, more automobiles, and more industry, there's more ozone in the lower atmosphere. Since 1900, the amount of ozone near the Earth's surface has more than doubled. Unlike most other air pollutants, ozone is not directly emitted from any one source. Tropospheric ozone is formed by the interaction of sunlight, particularly ultraviolet light, with hydrocarbons and nitrogen oxides, which are emitted by automobiles, gasoline vapors, fossil fuel power plants, refineries, and certain other industries. In urban areas in the Northern Hemisphere, high ozone levels usually occur during the warm, sunny, summer months (from May through September). Typically, ozone levels reach their peak in mid to late afternoon, after the Sun has had time to react fully with the exhaust fumes from the morning rush hours. A hot, sunny, still day is the perfect environment for ozone pollution production. In early evening, the sunlight's intensity decreases and the photochemical production process that forms ground level ozone begins to subside.

When ozone pollution reaches high levels, pollution alerts are issued urging people with respiratory problems to take extra precautions or to remain indoors. Smog can damage respiratory tissues through inhalation. Ozone has been linked to tissue decay, the promotion of scar tissue formation, and cell damage by oxidation. It can impair an athlete's performance, create more frequent attacks for individuals with asthma, cause eye irritation, chest pain, coughing, nausea, headaches and chest congestion. It can worsen heart disease, bronchitis, and emphysema.

Rubber, textile dyes, fibers, and certain paints may be weakened or damaged by exposure to ozone. Some elastic materials can become brittle and crack, while paints and fabric dyes may fade more quickly.

So why can't we take all of this "bad" ozone and blast it up into the stratosphere where ozone is desired? The answer lies in the vast quantities needed and ozone's instability in the dynamic atmosphere. Ozone molecules don't last very long, with or without human intervention. The vehicle necessary to transport such enormous amounts of ozone into the stratosphere does not exist, and, if it did, it would require so much fuel that the resulting pollution might undo any positive effect. Rather than seek such grandiose solutions, we need to decrease the production of those chemicals that create ozone in the troposphere. That means choosing to take public transportation instead of all driving separate cars, walking to school or work, and seeking alternative energy sources.

Volatile Organic Compounds or VOCs are organic chemicals that easily vaporize at room temperature. They are called organic because they contain the element carbon in their molecular structures. VOCs include...more 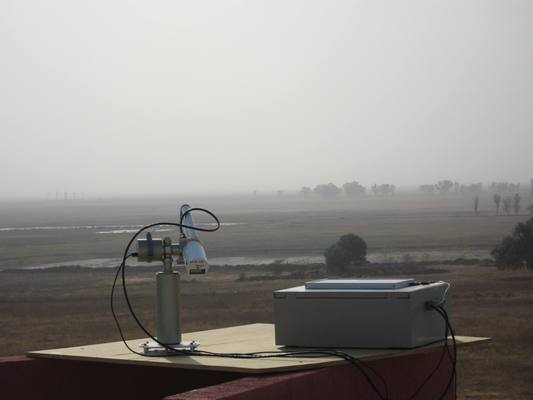 Today we were down wind of Mexico City, and it was quite polluted. The ozone did not get that high, but perhaps that is because we are only 40 kilometers (about 25 miles) a bit close to the city. We do...more

Releasing Nitrogen Pollutants to the Air