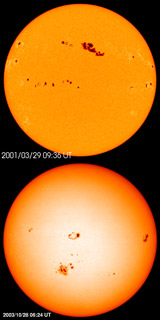 These two images of the Sun from 2001 (top) and 2003 (bottom) show how sunspots are mostly found near the Sun's equator and are absent at the poles.
Click on image for full size
Images courtesy of SOHO/NASA/ESA.

The North and South Poles of the Sun are different in several ways from the low-latitude regions of the Sun. Sunspots are common at low latitudes, but absent from the poles. At solar minimum, the Sun's atmosphere (corona) extends much further outward at the equator than at the poles and the speed of solar wind emanating from the Sun's poles is much higher than the speed of the wind "blowing" outward from equatorial regions.

The Sun has an overall magnetic field that is roughly a dipole (it has two poles, a north and a south), like the field of a bar magnet. Every 11 years or so, around the peak of the sunspot cycle, the Sun's magnetic poles reverse - North becomes South and vice versa. Earth also undergoes similar magnetic reversals, but much less frequently and on a far more erratic schedule. Earth's magnetic poles may go thousands or millions of years without switching, and the flips come at unpredictable intervals. Though reversals of the Sun's magnetic field happen much more quickly than their Earthly counterparts, they don't happen instantly. The transition is a chaotic process; the Sun's magnetic polarity may switch back and forth a few times before settling down. There can even be brief periods when the Sun has two magnetic poles of the same type (two north poles or two south poles)!

Sunspots are the visible manifestations of powerful local magnetic disturbances on the Sun's "surface". Sunspots are primarily found in a belt around the Sun's equator between 30° north and 30° south latitude. They are rarely found beyond 40° latitude, and never occur near the poles. The average location of sunspots varies over the course of a sunspot cycle. At the start of a cycle, sunspots generally appear at higher latitudes between 20 and 40 degrees. Sunspot locations migrate equatorward over the course of a cycle, with most new spots "popping up" within 10° of the equator near the end of each sunspot cycle. This sunspot "migration" phenomenon is called Spörer's Law and can be illustrated graphically using Maunder's Butterfly Diagram.

Some scientists think that sunspots are caused by "tangles" that arise in the Sun's dipole magnetic field over time. The Sun is not a solid body, but rather an enormous ball of gas and plasma. It does not spin like a single solid ball; instead, the equator goes around faster than the poles. One rotation at the equator takes 25 days; at the poles, it takes 34 days. As different parts of the Sun spin at different rates, the Sun's magnetic field gets dragged around and tangled up. Sunspots are powerful "knots" in the Sun's magnetic field that seem to be generated by the Sun's different rotation rates.

The Sun's polar atmosphere is also different from the atmosphere at low-latitude regions, especially around solar minimum. The solar corona does not reach as far outward at the poles, though the solar wind (the Sun's extended atmosphere) actually flows much faster from the polar regions than from the equator.

Sunspots are caused by extremely strong, localized magnetic fields on the Sun. "Jet streams" of plasma that form deep within the Sun's convective zone produce powerful magnetic fields. When these loops...more