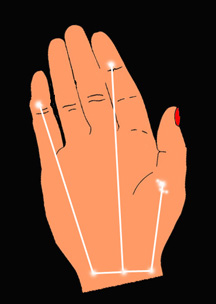 Constellation Of The Hand

According to the Lakota, the Constellation of the Hand, namely the bottom half of Orion, represents the arm of a great Lakota chief. The Orion's Belt represents the Chief's wrist and the thumb is formed by his sword. Rigel is the tip of the index finger, and Beta Eridani that of the little finger.

The tale related to this constellation tells us how the gods wanted to punish the Lakota chief for his selfishness and made the Thunder People rip out his arm. To help her father, the chief's daughter offered to marry whomever would recover her father's arm. One man made a long and perilous journey through the sky and the Earth.

Fallen Star, a young warrior born of a mortal mother and a celestial father, returned the lost arm to the chief and married his beautiful daughter. The return of the arm to the chief symbolizes the harmony between the gods and the people with the help of the younger generation.