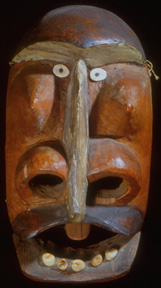 Anningan is the name of the Moon god of some Inuit tribes that live in Greenland. The Inuit are inhabitants of Alaska, Greenland and the Arctic. The word Inuit means "people." Its singular form is Inuk. The Athapascan speaking tribes of Alaska and Canada used to address the Inuit people with the offensive term of "Eskimo" which means "eaters of raw meat."

The Inuit people believe that once Anningan raped his sister, the Sun goddess Malina, and that he stubbornly continues to chase her in the sky. That is why the Sun and the Moon appear at different times in the sky. Anningan is so tenacious in his eternal pursuit of his sister that he neglects to eat. He becomes more and more thin until he is forced to come down to Earth and hunt for food. To satisfy his hunger, the Moon disappears from the sky for three days each month.

The Inuit believe that the Moon and the Sun hate each other and all members of the opposite sex. Occasionally, the moon-god reaches the sun-goddess and rapes her again, causing a solar eclipse. During a solar eclipse, men are supposed to remain at home if they do not want to become ill. Diseases are sent by Malina and Anningan upon those who offend them. Thus, during a lunar eclipse, women do not leave their homes.

Moreover, when a man dies or a girl is born, the Inuit believe there is a ring around the Moon which expresses the grief of the moon god, Anningan. The sun goddess expresses happiness for the same events, appearing twice in parhelion. Parhelion is an illusion of two or more suns, caused by certain atmospheric conditions.