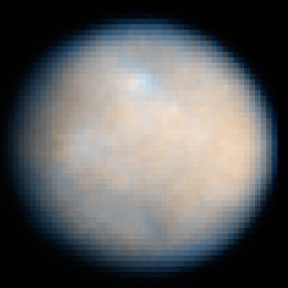 This picture of the asteroid Ceres was made by the Hubble Space Telescope in December 2003 and January 2004. Ceres was declared a "dwarf planet", along with Pluto and Eris, in 2006.
Click on image for full size
Image courtesy of NASA, ESA, J. Parker (Southwest Research Institute), P. Thomas (Cornell University), L. McFadden (University of Maryland, College Park), and M. Mutchler and Z. Levay (STScI).

Do you think Earth moves around the Sun in a circle? That is almost true, but not quite. The shape of Earth's orbit isn't quite a perfect circle. It is more like a "stretched out" circle or an...more