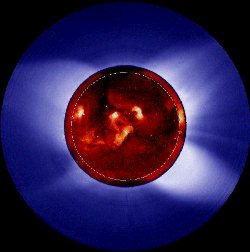 Image of the solar corona in white light (outer circle, blue and white) and X-Rays (inner circle, red, yellow, and black) on April 22, 1994, courtesy of the High Altitude Observatory and the Yohkoh Science team. The dashed circle is the solar radius.
Click on image for full size
Image courtesy of the High Altitude Observatory, National Center for Atmospheric Research (NCAR), Boulder, Colorado, USA. NCAR is sponsored by the National Science Foundation.The solar X-ray image is from the Yohkoh mission of ISAS, Japan.

A Yohkoh X-ray image of the Sun

The visible solar atmosphere consists of three regions: the photosphere, the chromosphere, and the solar corona. Most of the visible (white) light comes from the photosphere, this is the part of the Sun we actually see. The chromosphere and corona also emit white light, and can be seen when the light from the photosphere is blocked out, as occurs in a solar eclipse. The sun emits electromagnetic radiation at many other wavelengths as well. Different types of radiation (such as radio, ultraviolet, X-rays, and gamma rays) originate from different parts of the sun. Scientists use special instruments to detect this radiation and study different parts of the solar atmosphere.

Above the photosphere is the chromosphere, a region about 2500 kilometers thick. Just prior to and just after the peak of a total solar eclipse , the chromosphere appears as a thin reddish ring. The conspicuous...more

News Flash from the Sun! Shaking Loops Cause Solar Flares

Even though they are far away, solar storms can affect us. They can bother our spacecraft and electrical power systems. So, it is important to NASA and other space organizations to find out how they happen...more

Satellites in space help us measure space weather. They collect info about the Sun, Earth's magnetosphere, Earth's atmosphere, and space weather. Spacecraft that Watch the Sun Some spacecraft watch the...more