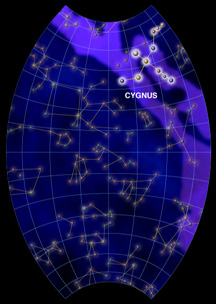 The Constellation Cygnus, the Swan
Click on image for full size

The mythology of Leda

Cygnus, the Swan, is also known as the Northern Cross because of its distinctive shape. The tail of the swan is marked by the bright star Deneb, Arabic for "tail". Three fainter stars cross the line between Deneb and the head of the swan, Albireo. Cygnus flies southward along the summer Milky Way, and into the Summer Triangle.

The tail and bill of the swan are both magnificent stellar sights. Deneb is a bright, blue supergiant star, very young as stars go. Albireo, the bill of the swan, is actually two stars which exhibit a spectacular amber and blue (one might even say "maize and blue") contrast. Cygnus is also sprinkled with a variety of nebulae, planetary, diffuse and dark. The North American Nebula is located just a few degrees east of Deneb, and is named for it's resemblance to the North American continent. The Veil Nebula, an ancient supernova remnant, can also be found in Cygnus, several degrees south of the eastern wing.

The identity of Cygnus is uncertain. He could be Zeus in the guise in which he seduced Leda, the mother of Helen of Troy. Possibly the swan is Orpheus, transformed and set in the sky to be near his harp. In one myth, Cygnus is a friend of Phaethon, the son of Apollo, the Sun god. Phaethon fell into the river Eridanus, trying to drive the sun-gods chariot. Cygnus dove repeatedly into the water to search for Phaethon. Out of pity, Zeus turned the boy into a swan.

What's in a Name: Arabic for "tail" because it is located in the tail of the Cygnus, the Swan. Claim to Fame: 19th brightest star in the sky (apparent visual magnitude = 1.3) Type of Star: White Supergiant...more

Eridanus is known as the Celestial River. It most often related to the Nile or Euphrates Rivers because they were so important to ancient civilizations. Eridanus is the second longest constellation in...more