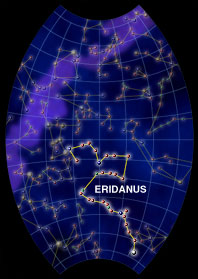 Eridanus is best seen from November through February.
Click on image for full size
Windows to the Universe original image

Eridanus is known as the Celestial River. It most often related to the Nile or Euphrates Rivers because they were so important to ancient civilizations. Eridanus is the second longest constellation in the night sky.

The brightest star is called Achernar, which is Arabic for "river's end". You can tell from the name that this star is at the southern end of the constellation, and is rarely seen in the Northern Hemisphere. The other tip is held by Cursa. It sets next to the bright star Rigel in the constellation Orion.

With some difficulty Eridanus can be traced through the sky. Once you find Cursa, follow the stars east and south. Most of the Northern Hemisphere can only see the top half of this long figure. Those living below the Equator can continue through the strands of lights until they reach Achernar.

There are over three dozen faint galaxies within Eridanus. Two of the more visible ones are located within the section which juts out to the east. A faint planetary nebula rests near the sharp "dip" that comes shortly before reaching Cursa.