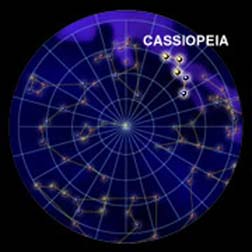 Cassiopeia was the queen of an ancient land. She and her husband, Cepheus, had a daughter named Andromeda. Cassiopeia would always say she was prettier than the sea nymphs. A monster called Cetus was sent to punish her. It was about to eat Andromeda, when Perseus saved her. All five are now constellations.

Cassiopeia is easy to find because it looks like a "W"! It's a circumpolar constellation, so you can see it all year long. If you use a telescope, you can find lots of cool objects around the constellation.

There are a few nebulae in Cassiopeia, including the Bubble Nebula. There are also several star clusters, or groups of stars, and even some galaxies! Next time you are outside on a clear night, check out this old constellation.

The constellation of Cassiopeia is one of the most famous in the sky. It is very easy to identify the stars that are part of it because they have the shape of a W. Cassiopeia was the queen of Ethiopia....more

Ursa Minor is usually called the Little Dipper. There is also a constellation called Ursa Major, which is called the Big Dipper. In many different myths, the two are bears. In Greek mythology, Hera turned...more

No one is sure that Black Holes really exist, but most scientists think they do. They are very hard to see, because they are black and so is space. They are black because their gravity is so strong that...more