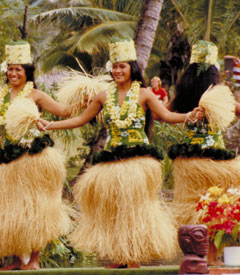 Haumea had several daughters. One of her daughters was Hi'iaka. Hi'iaka was the goddess of hula dancers.
Click on image for full size
Image courtesy of Corel Corporation.

In one Hawaiian myth, Haumea's children were born by popping out of various parts of the body of their mother. Hi'iaka popped out of Haumea's mouth. Namaka came from her mother's thigh.

There are some connections between the myth of Haumea and the dwarf planet and its moons. Astronomers think Haumea may have crashed into another large object a long time ago. Maybe pieces left over from that crash came together to form Haumea's moons. If so, the scientific story matches the myth. The "children" (moons) of Haumea did indeed come from the "body" of their "mother" (the dwarf planet).

The goddess Haumea also stands for the "element" of stone. The dwarf planet Haumea appears to contain more rocky material than is usual for most Kuiper Belt Objects (KBOs). KBOs usually have more ice in them. The dwarf planet is connected to the Hawaiian goddess in yet another way!

Finally, one of the groups involved with the discovery of the dwarf planet used telescopes in Hawaii to observe this faint, distant object. Who better to name the dwarf planet after than a Hawaiian goddess?

Pele is a fire goddess according to the people of Hawaii. She is savage and wrathful and resides in the crater of the volcano Kilauea. It is said that one day Kamapua'a, a pig god of Hawaii mythology,...more

Haumea was a goddess in Hawaiian mythology. She was the goddess of childbirth. One of her children was the volcano and fire goddess Pele. Her children also included the sea goddess Namaka and Hi'iaka -...more

The Maya believed the Earth was flat with four corners. Each corner was a direction shown by a color. For example, east-red; north-white; west-black; south-yellow. Green was the center. At each corner,...more

Ares was the Greek god of war, always acting and thinking like a warrior. Mars was identified with the Greek god Ares. Mars was driven by rage and a strong desire for violence. He enjoyed the great noise...more