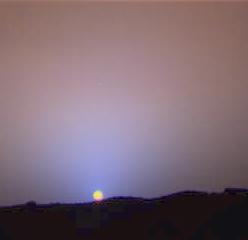 This is an image showing a Martian sunset.
JPL/NASA

The sunset image from the Viking lander

This is image of a Martian sunset illustrates just how thin the Martian atmosphere is.

The terrestrial "blue sky" comes about because molecules of the atmosphere scatter sunlight. In this image, the Martian sky appears pink and a little bit dark at sunset. This is because there are not enough molecules in the atmosphere to scatter the amount of light we are used to seeing on Earth, and also the many rusty-colored dust particles in the atmosphere contribute to the pink color. If you would like to know why the Earth's sky is blue, check the Quickie Question, below.

The thin atmosphere may have something to do with the cold surface temperatures because of the lack of a greenhouse effect, as well as having an affect on the strength of Martian winds.