This map shows a portion of the surface of Mars.
Click on image for full size
Image from: NASA

What about terrestrial Plate Tectonics?

The surface of Mars can be broken into two main regions: highlands and lowlands. The highlands are in the southern hemisphere (the bottom of the figure), and the lowlands are in the northern hemisphere of Mars (top of the figure). The lowlands contain the Tharsis Ridge, where many of the largest volcanoes of Mars are located. Next to the Tharsis Ridge is Valles Marineris, a very long canyon of Mars. The high resolution topographic map, which can be viewed by clicking on the image to the left, shows these regions in better detail. Measurements returned by Mars Global surveyor demonstrate the severe height difference between these two regions of Mars.

The highlands are heavily cratered. They are the oldest portion of Mars. Even though the lowlands are younger, they do have craters and so have not really been resurfaced since the end of the period of cratering which marked the earliest portion of the history of the planet.

Not seen clearly in this image are the Martian polar caps. Besides ice, the southern polar region of Mars contains other interesting geologic features such as layered terrain and giant sanddunes. This region was suppose to be explored by the Mars '98 mission.

Careful examination of this map reveals no evidence of the kind of plate tectonics which can be seen in the Earth's crust. 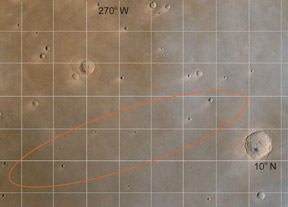