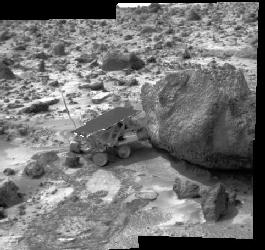 This image shows the Rover with the rock Yogi.
Click on image for full size
Image from: JPL/NASA

Yogi was the second rock to be explored by the Rover. It was a rock about 1 meter tall, and was about 5 meters northwest of the Mars Pathfinder lander.

Yogi appeared to be a bright rock and was relatively unweathered compared to other rocks at the site. This feature helped scientists figure out the possible origin of Yogi.