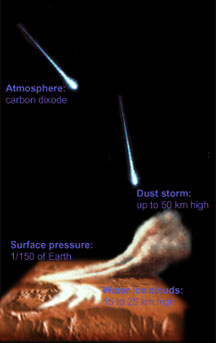 This drawing represents several features of the atmosphere on Mars including: dust storms, an atmospheric pressure much lower than found on Earth, and a composition primarily of carbon dioxide.
Click on image for full size

Although the length of the Martian day (24 hours and 37 minutes) and the tilt of its axis (25 degrees) are similar to those on Earth (24 hours and 23.5 degrees), the orbit of the planet about the Sun affects the lengths of the seasons the most. The atmosphere is composed mainly of carbon dioxide (95.3%), nitrogen (2.7%), and argon (1.6%), with small amounts of other gases. Oxygen, which is so important to us on earth, makes up only 0.13% of the atmosphere at Mars. There is only one-fourth as much water vapor in the atmosphere.