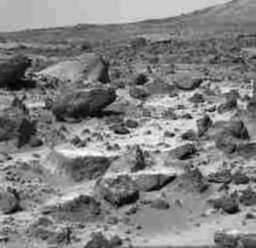 Possible Origins of Rocks explored by the Rover

Unlike Earth where rivers can

Because many of the rocks seem to be similar, some scientists are presently guessing that the boulders may have been eroded from an outcropping 30 km away.

On the other hand, some of the weathering features found on the rocks may be signs that some of the rock originated as ejecta from the Big Crater located 2.2 kilometers to the south of the landing site.