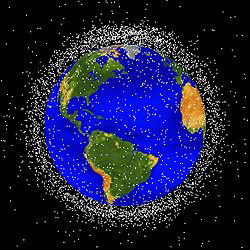 Though numbers vary, it is estimated that there are at least 8,000 trackable objects in near-Earth space. These objects are baseball size or larger and can be tracked by ground-based radars. Of these 8,000 items, only 400-500 are operational spacecraft. The rest is space junk! This space junk or orbital debris includes things such as hatches blown off space modules, garbage discarded into space from past space stations, or satellites that are no longer in use.

In addition to the 8,000 trackable objects, there are millions of flecks of paint, metal or plastic that are currently in space. Much of this smaller space junk has come from the explosion of rocket stages or the explosion of satellites and their parts. Unfortunately, the past 30 years of space exploration have generated a lot of junk that poses a significant threat to spacecraft now in orbit.

Man-made debris orbits at a speed of roughly 17,500 miles/hour (28,000 km/h)! Think of the damage even a small speck of paint could do if impact occurred at such high speeds. Even an object as small as 1 cm in diameter has enough kinetic energy to disable a medium-sized spacecraft!

Space junk is particularly a problem for long duration Earth-orbiting spacecraft, especially the International Space Station (ISS). On a list of hazards for the ISS compiled by the NASA Safety Office, the threat of impacts by micrometeorites and orbital debris ranked #6 out of 10 hazards. NASA uses mainly preventative measures when it comes to dealing with space junk, and that means heavy shielding of the ISS and other spacecraft.

Spacecraft must be designed to withstand hypervelocity impacts with pieces of space debris. Testing must be done on the shielding used for future spacecraft. Such experiments were actually undertaken in the Long Duration Exposure Facility (LDEF). The LDEF was deployed in orbit April 1984 by the Shuttle Challenger. It was retrieved 5.7 years later. During this time the LDEF was designed to take meteoroid and debris surveys involving many different materials.

Besides having appropriate shielding from space junk, a spacecraft can move out of the way to avoid impact with debris. Currently, the Aerospace Corporation in California has established a center that does analysis of space debris avoidance. The Center for Orbital and Reentry Debris Studies (CORDS) provides improved warning of debris hazards, allowing mission planners to take evasive actions such as adjusting launch times and flight parameters.

Clearly, space debris is a danger to operating spacecraft in orbit around Earth. Is space junk a danger to life here on Earth? Though pieces of space junk have been known to fall to Earth from Oregon, U.S., to Uganda, Africa, falling space junk isn't likely to endanger humans or other life on Earth. Most space debris is small enough that it burns up in the atmosphere of Earth. Otherwise, it has a good chance of falling into the ocean which covers 2/3 of the planet. The North American Air Defense Command (NORAD) and United States Space Command (USSPACECOM) do monitor man-made objects in space via radar. They also track when space debris falls into the Earth's atmosphere or onto Earth.

There are several thousand trackable objects in near-Earth space. These objects are baseball size or larger and can be tracked by ground-based radars. Of these thousands of items, only a few hundred are...more