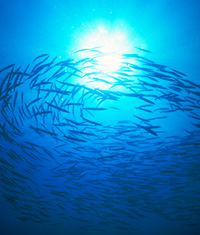 The launch of SeaWifs onboard the SeaStar spacecraft on August 1, 1997, shows NASA's concern not just for the space sciences, but for the earth sciences as well. In fact, the Sea-viewing Wide Field-of-View Sensor (SeaWifs) is part of NASA's Mission to Planet Earth program, which sets out to study the Earth as a global system.

SeaWifs will use its remote perspective in space to observe and monitor large-scale environmental processes of the ocean that simply could not be achieved from an earth-bound perspective. One of the environmental aspects that will be studied is the ocean's productivity, or more specifically how the ocean's vegetation production influences global climate.

From the satellite's view, vegetation (mainly phytoplankton) can be mapped by measuring the ocean's color. Phytoplankton, microscopic marine plants, remove carbon dioxide from the atmosphere for internal use. Scientist are eager to refine their understanding of how this exchange of carbon dioxide plays a role in determining global climate.

SeaWifs will also provide NASA with data that will help develop fishing maps so that estimates can be made for commercial fishery yields in upcoming years.

The Orbital Sciences Corporation's SeaStar spacecraft is to be launched from Vandenberg Air Force Base, California, aboard a Pegasus expendable launch vehicle.