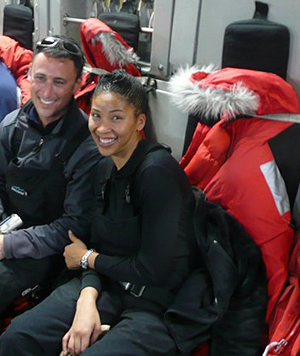 Shakira Brown, a middle school teacher from New York City, has tried hard to get her students interested in science. This fall she's going to extremes to make this happen. Brown is currently in Antarctica as a member of a scientific expedition that is trying to learn what conditions were like there tens of millions of years ago. The project will help us understand what could happen to the Earth as the climate changes. It will also allow K-12 students from across the country to see scientists in action. Brown, the scientists, and students on the expedition are blogging about their work and will interact with K-12 students through videoconferencing and the Internet.

Scientists know that higher levels of carbon dioxide (CO2) and other greenhouse gases can change our climate, and many experts believe that this climate change may affect our lives dramatically. After staying almost the same for millions of years, the amount of CO2 in our atmosphere has climbed quickly in the last 100 years and scientists think it will climb even higher.

The last time CO2 levels were this high was between 25 and 40 million years ago. About 34 million years ago, the climate switched from a warm greenhouse world, where very little ice collected in Antarctica, to the so-called icehouse world, where large ice sheets began to form. Based on research by scientists, once the ice sheet that covers Antarctica formed, it sometimes grew larger than it is today and sometimes melted to a much smaller size. This caused sea level to dramatically rise and fall.

The team hopes to collect data about the Earth's conditions during that period so they can better understand what happened the last time CO2 levels were so high. To do this, they will study the sediments deposited off the coast of Antarctica during the the greenhouse world and the icehouse world.