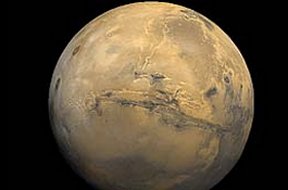 "The story the pictures tell us is really inexplicable," Michael Malin told the Washington Post. Malin is one of the scientists working on the project. "These have all the classic morphology of seepage-induced mass runoff."

"The images look really convincing," Michael Carr of the U.S. Geological Survey, who has reviewed the findings, told the Post. "There's something very peculiar going on there. It's very stimulating."