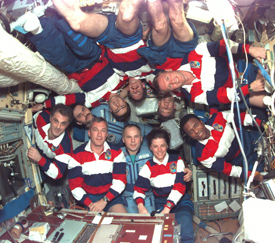 The Endeavour shuttle has unlocked from the Mir space station. Separation occurred at 10:56 a.m. CST today. The shuttle is now headed home. Landing is expected on January 31, 1998, at 4:36 p.m. CST at Kennedy Space Center.

While Endeavour was docked with Mir, the crews of the spacecraft transfered more than 8,000 pounds of supplies onto Mir. Andy Thomas also switched places with David Wolf. Thomas will remain on Mir for four months. He will indeed have some time to do research! Thomas is the last astronaut who will live aboard Mir.