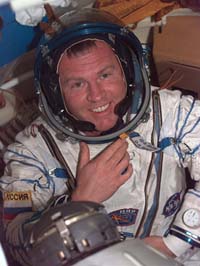 The shuttle Endeavour was launched on January 22, 1998. After three travel days, the shuttle docked with the Russian space station Mir. This is the eighth shuttle mission to dock with the station.

During the docking, astronaut Andy Thomas traded places with David Wolf. The shuttle and Mir crews are currently working on transferring thousands of pounds of hardware, science equipment and water from the Endeavour to Mir. As of this morning (today being the third full day of being docked with Mir), 60% of the transfers had been completed.

Endeavour and Mir will remain docked until around 11 a.m. CST Thursday.

Astronaut David Wolf started spacewalk training in 1991. His training paid off yesterday when he and Mir Commander Solovyev completed a four hour EVA outside the Russian space station. The men were suited...more