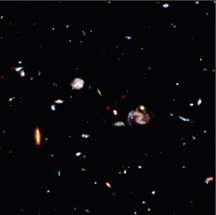 Astronomers analyzing images of the faintest region of the universe taken from NASA's Hubble Space Telescope (HST), have identified what they believe as the most distant object observed to date.

The researchers have found several dozen galaxies hidden among 2,000 galaxies visible in the Hubble image which appear to be more distant than any seen previously. One guess is that these galaxies may have existed when the universe was less than five percent its present age or in other words a few hundred million years after the Big Bang. Scientists are using these images to determine the distance of each of the galaxies based on their colors.