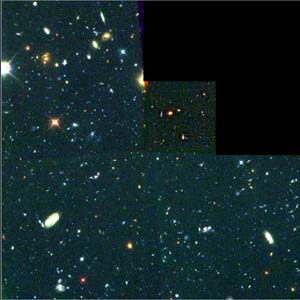 Recent images of the Hubble space telescope of distant galaxies shows a group of 18 gigantic stars close together that will eventually merge into a few galaxy-sized objects. These images were taken using Hubble's Wide Field Planetary Camera 2.

The 18 identified building blocks appear to be at the same distance from Earth, but so far away, 11 billion light years, that they existed during the birth of galaxies. Astronomers believe that the stars seen in these images are the actual building blocks of galaxies and that they are seeing galaxies under construction.These recent finding supports a popular theory that galaxies started off as clumps of stars, which through a complex series of encounters, merged into a larger collection that we see as fully-formed galaxies today.