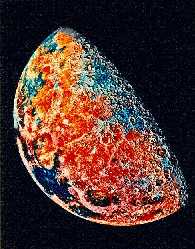 This is an image of the Moon showing various minerals found on the surface.
Click on image for full size
NASA

Return to the Moon

Although the Moon does not appear to have a magnetosphere surrounding it, it *is* a magnetic object in space. Scientists think that the magnetism of the Moon's surface is leftover from a time when the Moon's magnetic field was actively created by a dynamo within the lunar core, and that this remnant magnetism may gradually erode away.

Theories also suggest that the Moon's magnetism may come from collisions with other celestial bodies such as asteroids and comets, which might have imparted to the Moon some magnetic properties.

Some regions of the Moon's surface are more magnetic than others. A strip of the lunar crust called the Rima Sirsalis seems to be very strongly magnetic. Measurements of the uneveness of the magnetism and depth of the lunar crust such as those being made by the Lunar Prospector mission can supply information about the magnetism of the surface, as well as the size and electrical conductivity of the lunar core. Ultimately these measurements will help scientists better understand the Moon's origins. For example, if the core contains more magnetic elements (such as iron) than the Earth, then the collision/ejection theory of lunar origin loses some support.

Scientists believe that certain lunar surface features, such as the albedo swirls, may have magnetic origins. The swirls resemble unstirred cream in a coffee cup. Researchers suspect that the contrasting light and dark regions might indicate the juxtaposition of irregular magnetic fields. Using data obtained both from its Magnetometer and Electron Reflectometer instruments, Lunar Prospector will map global locations, strengths and orientations of lunar crustal magnetic fields. With these experiments, scientists can learn if there is a relationship between such magnetic fields and the surface.

The co-formation theory explains the origin of the moon as an object which formed out of the primitive solar nebula at the same time and roughly the same place as the Earth. As shown in this picture, while...more

In decades past it was accepted that moons such as the Earth's moon or the moons of Jupiter were airless bodies with no atmosphere whatsoever. Now, however, measurements have shown that most of these moons...more

You may have heard people refer to a Full Moon in the autumn as the "Harvest Moon" or the "Hunter's Moon". Native Americans in the eastern and northern parts of North America had special names for the...more