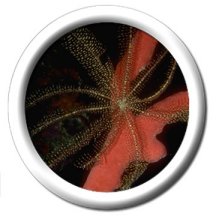 The most widely known echinoderm is the sea star, or starfish. But sea urchins, sea lilies and brittle stars are also echinoderms.

Sea lilies and feather stars are two types of echinoderm. These delicate creatures are very beautiful, with several arms stretching out from the center. Echinoderms don't have a head, instead they appear to be groups of legs tied together at the middle!

Sea stars are very weird. They invert their stomachs to feed on molluscs and other invertebrates, and they can grow back any legs they may lose!