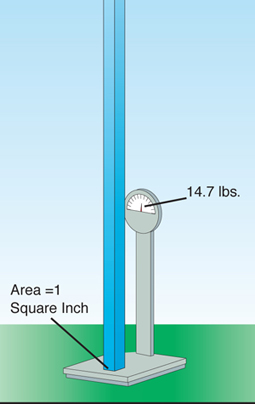 Pressure is an idea scientists use to describe how gases and liquids "push" on things. The atmosphere has pressure. If you imagine a column of air that is 1 inch square and goes from the Earth's surface all the way up through the atmosphere, the pressure of the air in that column is 14.7 pounds per square inch. Now that may seem like a lot of pressure pressing down on your body if you think of how many square inches it takes to cover your body! But pressure is a force that is spread out over an area. So all of that atmospheric pressure is not a downward force, but a force spread over the entire skin, hair, fingernails and so on.

The air pressure in Earth's atmosphere is pretty strong when you are near sea level. When you go higher up, in an airplane or to the top of a mountain, there is less pressure. At the surface of the Earth, the air is quite dense. At higher elevations, the air is less dense. Therefore, scientists say that atmospheric pressure varies directly with air density.

The highest recorded atmospheric pressure, 32.06 inches of Mercury, occurred at Tosontsengel, Mongolia, December 19, 2001. The lowest pressure (outside of those measured in tornadoes) was 25.69 inches of Mercury in the Western Pacific during Typhoon Tip on October 12, 1979.

Even though we can't see air, it is real and is made of up many molecules which are zipping around at astonishing speeds. Air molecules travel about 1,090 mph at the surface of the Earth. That said, all...more

Weather balloons are used to carry weather instruments that measure temperature, pressure, humidity, and winds in the lowest few miles of the atmosphere. The balloons are made of rubber and weigh up to...more

Each year scientists make predictions about the strength of the upcoming hurricane season. To make seasonal hurricane predictions, scientists look at climate models and climate events that are known to...more