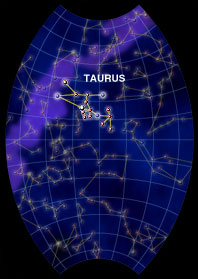 Taurus is commonly known as The Bull. It passes through the sky from November through March. Taurus was a very popular constellation in ancient times, so there are many myths about it.

The Greeks thought the stars represented Zeus in disguise as a white bull. He tricked Europa into climbing on his back. He then swam out to sea and carried her to Crete. In Egypt, the constellation was a reminder of Apis, the Bull of Memphis. He served as a servant to Osiris, god of the Sun.

Just as famous as Taurus is the group of stars within it. The Pleiades are a group of seven stars that lie on the Bull's shoulder. The Greeks believed these were the Seven Sisters, daughters of Atlas and Pleione. It was told that they asked Zeus to place them in the sky to escape Orion, who was desperately pursuing them. Little did they know that Orion would be placed right next to Taurus in the night sky!

The brightest star in Taurus is Aldebaran. It serves as the eye of the bull and is near the Hyades, a lesser known but still visible group of stars. The beautiful Crab Nebula is located above the tip of the bottom horn.

Atlas is the son of Iapetus and Clymene, two of the Titans. One day Zeus raged a war against Cronus for the right to be ruler of the gods. Atlas joined the side of the Titans and Cronus. Zeus defeated...more