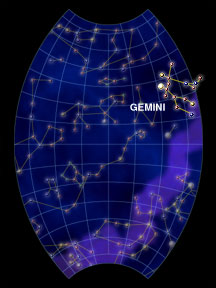 Gemini is a member of the Zodiac. To find the Twins, look for the bright stars Castor and Pollux.
Click on image for full size
Windows to the Universe original image

Leda is now in the sky as Cygnus the Swan

Gemini is really easy to find. All you have to do is look for the two bright stars that make up the heads! They are called Castor and Pollux. Once you find the heads, look for their arms and legs. Gemini is right between Cancer and Taurus.

In Greek myth, the two twins are named Castor and Pollux. They were the sons of Zeus and Leda. The Romans called them Romulus and Remus. They were raised by Chiron. The heroes were put into the sky to live with the gods.

Below the stars of Hydra, the sea serpent and Scorpius, the scorpion, you can find Centaurus. Centaurus is a half-man, half-horse creature. He faces east holding a lance which he is using to defend himself...more