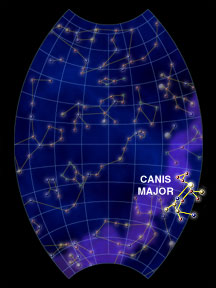 Not only is Sirius bright, but it is also mysterious. Ancient civilizations described the star as red and fiery, but today it is very white. Scientists can't explain this phenomenon. With the exception of Sirius, Canis Major doesn't contain any significant stellar objects. M41 is an open cluster just south of Sirius; it is visible on clear nights. There are a few nebulae and galaxies, but they are too faint to see even with a small telescope.