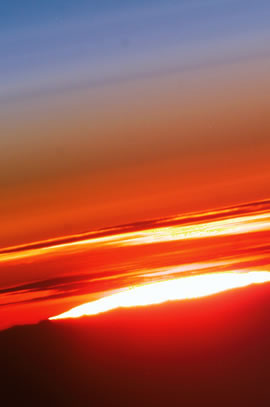 Climate is regulated by complex interactions among components of the Earth system.

Fundamental Concept 2a.
Earths climate is influenced by interactions involving the Sun, ocean, atmosphere, clouds, ice, land, and life. Climate varies by region as a result of local differences in these interactions.

Fundamental Concept 2b.
Covering 70% of Earths surface, the ocean exerts a major control on climate by dominating Earth's energy and water cycles. It has the capacity to absorb large amounts of solar energy. Heat and water vapor are redistributed globally through density-driven ocean currents and atmospheric circulation. Changes in ocean circulation caused by tectonic movements or large influxes of fresh water from melting polar ice can lead to significant and even abrupt changes in climate, both locally and on global scales.

Fundamental Concept 2c.
The amount of solar energy absorbed or radiated by Earth is modulated by the atmosphere and depends on its composition. Greenhouse gasessuch as water vapor, carbon dioxide, and methaneoccur naturally in small amounts and absorb and release heat energy more efficiently than abundant atmospheric gases like nitrogen and oxygen. Small increases in carbon dioxide concentration have a large effect on the climate system.

Fundamental Concept 2d.
The abundance of greenhouse gases in the atmosphere is controlled by biogeochemical cycles that continually move these components between their ocean, land, life, and atmosphere reservoirs. The abundance of carbon in the atmosphere is reduced through seafloor accumulation of marine sediments and accumulation of plant biomass and is increased through deforestation and the burning of fossil fuels as well as through other processes.

Fundamental Concept 2e.
Airborne particulates, called aerosols, have a complex effect on Earths energy balance: they can cause both cooling, by reflecting incoming sunlight back out to space, and warming, by absorbing and releasing heat energy in the atmosphere. Small solid and liquid particles can be lofted into the atmosphere through a variety of natural and man-made processes, including volcanic eruptions, sea spray, forest fires, and emissions generated through human activities.

Fundamental Concept 2f.
The interconnectedness of Earths systems means that a significant change in any one component of the climate system can influence the equilibrium of the entire Earth system. Positive feedback loops can amplify these effects and trigger abrupt changes in the climate system. These complex interactions may result in climate change that is more rapid and on a larger scale than projected by current climate models.