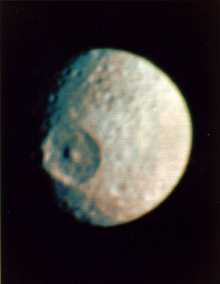 The Surface of Mimas

The surface of Mimas is pockmarked with craters. In that respect Mimas is very much like Callisto. The largest crater is what gives Mimas its characteristic resemblance to the Death Star. This crater represents perhaps the largest impact that a small body such as Mimas could sustain without shattering. The crater is about 135 km (90 miles) across, which is about the width of Lake Michigan. Perhaps a collision such as this is what caused an older moon to break apart and form Epimetheus and Janus.