The atmosphere is a mixture of nitrogen (78%), oxygen (21%), and other gases (1%) that surrounds Earth. High above the planet, the atmosphere becomes thinner until it gradually reaches space. It is divided into five layers. Most of the weather and clouds are found in the first layer.

The atmosphere is an important part of what makes Earth livable. It blocks some of the Sun's dangerous rays from reaching Earth. It traps heat, making Earth a comfortable temperature. And the oxygen within our atmosphere is essential for life.

Over the past century, greenhouse gases and other air pollutants released into the atmosphere have been causing big changes like global warming, ozone holes, and acid rain. 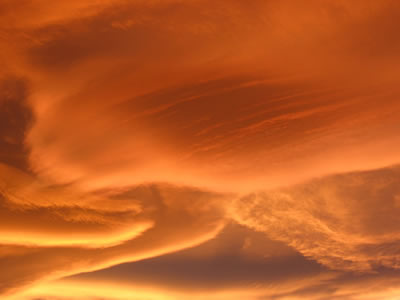 Layers of the Atmosphere

The atmosphere is divided into five layers. It is thickest near the surface and thins out with ...Read more

Weather is the state of the atmosphere at a given time and place. Most weather takes place ...Read more

Phenomena in the Polar Atmosphere There are some unique phenomena that happen in the atmosphere ...Read more

Have you ever seen clouds in the sky that looked different than "normal" clouds? Or have you ...Read more

The Ozone Hole is a major "thinning" of the ozone layer in Earth's atmosphere. It ...Read more

Clouds are an important part of Earth's weather and climate. Scientists use computer models ...Read more

Arts and Culture About Clouds, Weather, and Climate

Whether it is how an artist paints the shapes of clouds or how a poet describes a gloomy weather ...Read more

Do you know what happened during the Little Ice Age?

Do you know what this word or phrase means?
Seismogenic
xSeismogenic : Capable of producing earthquakes

Lake Tanganyika, the second-oldest and second-deepest lake in the world, could be in for some rough waters. Geologists have determined that the East African rift lake has experienced unprecedented warming...Read more