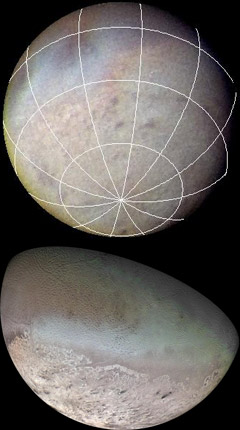 These two images show Triton's South Pole. The nitrogen ice polar cap is the light pink area along the bottom and lower left parts of the lower image.
Click on image for full size
Images courtesy of NASA/JPL/USGS.

Triton is by far the largest moon of Neptune, and is one of the most unusual large moons in the Solar System. The poles of Triton are especially interesting.

Triton has a frozen polar cap with ice geysers. This frigid moon has a very high surface albedo (it is covered with bright, shiny ices), especially at the South Pole. The pole is topped with a cap of nitrogen and methane ices. Scientists have spotted darker smears near Triton's South Pole, which they believe are surface deposits of materials downwind of cryovolcanoes (ice geysers or ice volcanoes). This makes Triton one of only four Solar System bodies on which active volcanism has been observed; the other three are Earth, Jupiter's moon Io, and Saturn's moon Enceladus. Astronomers suspect that Triton's North Pole is also covered by an ice cap; however, the moon's northern hemisphere has never been imaged in detail.

Thanks to an odd mix of orbital geometries of both Triton and its "parent" planet Neptune, Triton's poles spend most of their time in either perpetual darkness or perpetual light. Triton may have been a Kuiper Belt Object that was captured into orbit by Neptune's gravity in the distant past. The moon's orbit is tilted by a large amount away from Neptune's equator. Triton's odd orbit combined with Neptune's axial tilt and long orbital period (more than 164 Earth years) make for very, very long seasons at the moon's poles. Triton's poles alternate between 80+ years of perpetual summertime daylight and 80+ years of winter darkness.

The South Pole of the planet Neptune is unusual in several ways. Triton, Neptune's largest moon, also has interesting features at its poles. Like Earth, Neptune's spin axis (which defines the locations...more