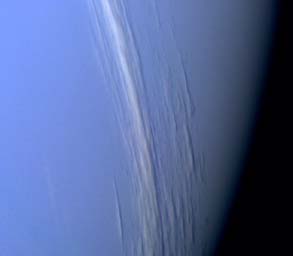 This is an image of cirrus clouds found on Neptune.
Click on image for full size
NASA

This image shows some clouds known as "cirrus" clouds, extending for many kilometers across the face of Neptune. These clouds are very high up, for they can be seen to cast shadows on the lower clouds, whi ch are 164,000 feet miles down! (In an airplane on Earth, you would fly at 35,000 feet!)

Earth also has cirrus clouds. These are shown in the connected page next to Neptune's for comparison.

This image shows the new Great Dark Spot of Neptune, which was discovered using the Hubble Space Telescope. The image shown here, shows a large "hole" in the clouds of Neptune in pink, in the northern...more

This image of Neptune uses false colors to show where the smog is. The smog of Neptune can be seen in red along the edge of the image. This smog haze is found very high up in the atmosphere, over the clouds...more

Scientists think that the solar system formed out of a spinning cloud of hydrogen and helium molecules. Because the cloud was spinning, it flattened into a frisbee shape, just like a ball of pizza dough...more

Neptune was discovered in 1846. But it wasn't discovered using a telescope. Scientists used math instead! They watched Uranus and saw that its orbit was doing weird things. They knew another planet had...more

The picture shows places on Jupiter which are hot. Jupiter is a very warm place, as shown in the picture, sort of like a warm log in the fireplace which gives off heat. Like Jupiter, Neptune also gives...more