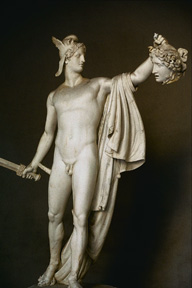 Perseus was an ancient Greek hero. His mother was Danae, the daughter of Acrisius, the king of Argos. When a prophecy revealed to Acrisius that his grandson would kill him, Acrisius imprisoned his daughter Danae to keep her chaste. Zeus, however, fooled Acrisius' precautions by entering the prison disguised as a shower of gold. When Acrisius discovered that Danae had given birth to Perseus, he had the mother and the son thrown into the sea in a chest of wood.

Luckily they reached the island of Seriphos where the king Polydectes offered them hospitality and protection. Perseus was secretly raised on the island and became a courageous young man. He was sent to complete a dangerous mission.

Perseus had to fetch the head of the Gorgon Medusa whose head could turn anyone who looked at it into stone. With the help of Hermes, Perseus succeeded. On his voyage back to Seriphos, he met the beautiful Andromeda in Ethiopia and married her. When his triumph became known, he was invited to the city of Larissa to participate in funeral games in honor of the king.

During the games, Perseus threw a discus and accidentally hit his grandfather Acrisius, who was watching the games, unaware of his grandson's presence. Acrisius died fulfilling the prophecy.

Pegasus was a winged horse that came out of Medusa when she was be-headed by Perseus. The Gorgon Medusa was once a beautiful Lybian princess. Because she was seduced by the sea god Poseidon in the temple...more