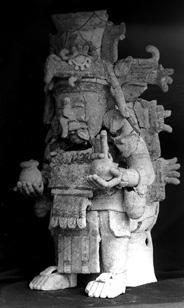 Xib Chac was the Mayan rain god. He was a benevolent god, and was represented by many colors. During ceremonies, the priest was assisted by four old men, called Chacs, in honor of his name.

An important part of the ceremony was performed by another person, named Chilam. This individual would reveal, while in a state of trance, the messages sent by the gods to be interpreted by the priests.