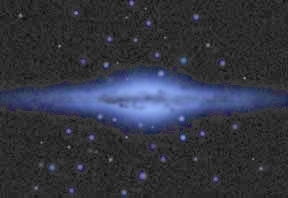 The most distant object visible to the naked eye is M31, the Andromeda Galaxy, at about 2 million light-years. This is the nearest large galaxy to us, and a very bright one at that. I can't say for certain the most distant object that you can see with an amateur telescope because the size of such telescopes can vary a lot, and because it depends on the detector that you have attached to it (like your eye, film, or an electronic CCD). But you can definitely see galaxies beyond the Local Group, even with your eyes.

Looking Back in Time

When Astronomers probe the deepest regions of space they are actually looking back in time. This is simply because of the finite speed of light. Light moves at the speed of 300,000,000 meters/second (186,...more

In the 1960's another startling discovery was made quite by accident. A pair of scientists at Bell Laboratories detected some annoying background noise using a special low noise antenna. The strange thing...more