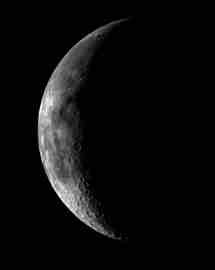 Astronomers may have found the Moons youngest crater. It formed in 1953 when the Moon was hit a small asteroid. From Earth the impact looked like a small flash of light on the Moon.

Scientists believe the object that hit the Moon was probably the size of about 3 football fields and its impact made a crater 2 km in size, about the size of New Yorks Central Park. They have found pictures of the Moon surface that show the new crater surrounded by a bright blue blanket of lunar soil.