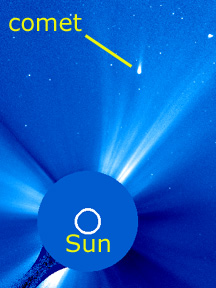 On January 29, 2003 a comet passed very close to the Sun. This picture was taken by a spacecraft called SOHO. When the SOHO spacecraft took this picture, we couldnt see the comet from Earth because the comet was too close to the Sun. SOHO has a special instrument called a coronagraph which blocks the brightest light from the Sun. A coronagraph is a lot like an eclipse in the way it blocks the Sun's light.

Comet Kudo-Fujikawa passed very close to the Sun. For a while it was closer than Mercury, the closest planet to the Sun.

Some pictures from SOHO were put together to make a movie (820K GIF) of the comet passing the Sun. Here is an even better movie (3.7M GIF). These movies are VERY BIG, and may take a long time to download to your computer!