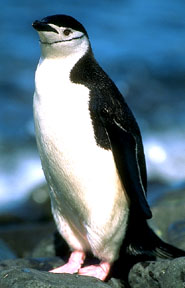 This little guy is lucky -- he doesn't need a sweater like his cousins!
Click on image for full size
Courtesy of Corel Photography

Seals are hurt by oil spills too!

An oil spill off the coast of Australia is hurting the penguin population. The oil makes their insulation useless, making it mighty cold for these little birds. But never fear, because sweaters are on the way!

The North Olympic Shuttle and Spindle Guild is busy knitting these little birds wool sweaters. These fairy penguins are less than a foot tall, so the sweaters themselves are only 9 or 10 inches long and a few inches wide. And of course, there are holes for the penguins' heads and flippers. These little "shirts" will save the lives of many penguins.