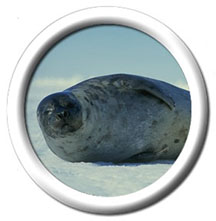 Although this seal is almost black in color, some seals are bright white!
Click on image for full size
Windows Original, adapted from Corel Photography

Seals are carnivorous animals that live partly in the ocean and partly on land. Most seals come on land to mate and to shed their hair. But, seals can live up to 90% of their life in the water. So, they have webbed feet for swimming.

Oil spills can have a direct effect on seal colonies. Toxic chemicals will be taken in by the seals because they have eaten food with toxins in it. These toxins can eventually get into the blood stream making them prone to disease and death. Seals are also often caught in nets! So, humans need to be careful not to disrupt seal populations!