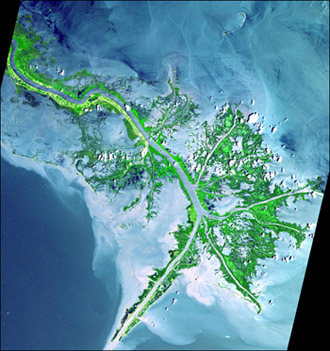 The land around New Orleans, Louisiana has been sinking. At the same time, sea level has been rising because of global warming. These changes have caused large areas of land to disappear into the ocean.

Scientists have discovered how to build-up new land in an area by rerouting water from the Mississippi River. They used computer models to study how the river carries sediment and deposits it in areas where the flowing water slows. The build up of sediment creates land.

The delta of the Mississippi River has been losing about 44 square kilometers (17 square miles) each year since around 1940.

The scientists model looks at how diverting the river water through two openings in the levees would affect the land 150 kilometers (93 miles) from New Orleans. Nearly half of the river's water would spill out through the openings. The water would slow down beyond the levees, depositing sediment and helping to build up the land.

The changes to the river's path would not solve the problem of disappearing land in the New Orleans area, but they would help slow the loss of land. Scientists estimate that the amount of new land created would be up to 45 percent of the area that will be lost over the next 100 years.