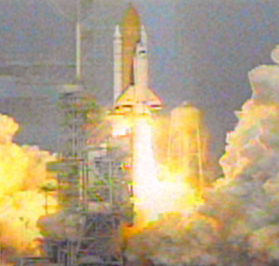 NASA launched the shuttle Columbia on November 19, 1997. This is the last shuttle launch of the year.

Columbia will be in orbit for 16 days. It has some exciting things planned!

The crew will release the SPARTAN science satellite from the shuttle for two full days. The SPARTAN satellite is designed to study the Sun. Later in the mission, two members will do a spacewalk outside of the shuttle. They are preparing for the building of the International Space Station (ISS).

During the entire mission the crew will be doing microgravity science experiments. They will make metals in space and grow plants there that could be used for food.