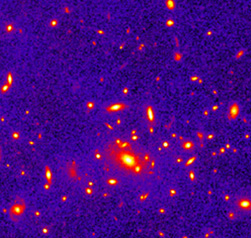 Astronomer Megan Donahue has discovered one of the heaviest and hottest galaxy clusters. Cluster MS1054-0321 is located 8 billion light-years from Earth. It has thousands of galaxies and trillions of stars! The temperature of the material between galaxies is about 300 million degrees Fahrenheit (so the galaxies themselves must be very hot!).

If you could name a galaxy cluster, what would you name it?