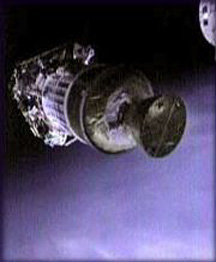 The Chandra X Observatory shortly after being released by Columbia.
Click on image for full size
Courtesy of NASA

The latest news about Chandra X from NASA

After failing to launch on two previous attempts, the Space Shuttle Columbia finally took off on July 23, 1999, from Kennedy Space Center. The commander is Eileen Collins, the first woman to ever lead a mission into space.

Hours later, the crew completed its main mission: putting the Chandra X Observatory in space. The telescope will study distant objects like quasars for at least 5 years. The Chandra is expected to rival the Hubble Space Telescope.

There was a lot of pressure on NASA to make this attempt successful. If Columbia had not launched on this try, it would have been delayed until August, or possibly next year.