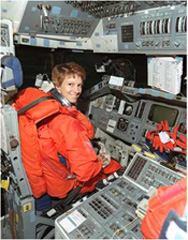 Space Shuttle Columbia was scheduled to launch on July 20, 1999, but was postponed at the last second. With six seconds left before launch, the mission was haulted due to faulty equipment. The mission has been rescheduled for July 22, 1999, between 12:28 and 1:14 am EDT.

Five astronauts, led by Air Force Col. Eileen Collins, will haul the new Chandra X Observatory into space aboard the Space Shuttle Columbia. This will be the 95th shuttle mission to date. At one time, we didn't know if the launch would occur.

This will be the first time a shuttle has been commanded by a woman. Collins will be making her third trip into space. She says her crew is ready to go.

The Chandra X Observatory is the newest tool scientists have for researching the deepest areas of the universe. The $1.5 billion telescope will be more powerful than the Hubble Telescope. Plans involve using the telescope for at least the next ten years. The crew is especially excited about this powerful machine.