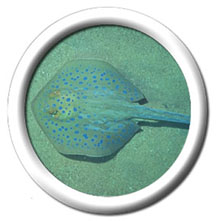 The sea rays are probably the most mysterious creatures of the ocean. Many have soft, widely spanned bodies that flow through the water like silk. They have a variety of appetites--some enjoy corals, fish and crustaceans, while others feast on zooplankton. Regardless, rays are truly amazing animals that catch the eye of most visitors to the ocean.

Although humans have no need to worry about a ray attack, they also should be very careful when coming in contact with one. Many species, such as the Blue-spotted Fan Ray, have venomous spikes on their long tails. Others, like the Numbfish, will shock their enemies with 200 volts of electricity.

Rays come in a variety of sizes and colors. The giant Manta Ray can reach over 19 feet in width, and has a dark-blue top with an almost white bottom. Although they are very large, the Manta Rays are usually passive and gentle. Even so, many parts of the world still call it the Devil Ray. Other rays, like the Mangrove Stingray, only reach widths of 5 feet. But don't be fooled by their sizes, the smaller rays tend to be the more dangerous ones!