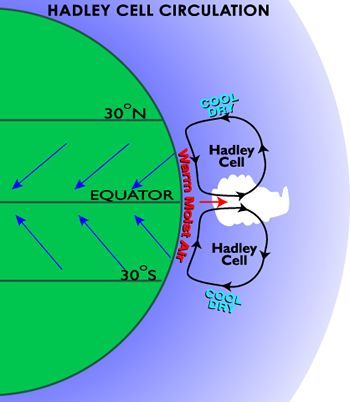 The Hadley cell is an atmospheric circulation pattern in the tropics that produces winds called the tropical easterlies and the trade winds. In the Hadley cell, air rises up into the atmosphere at or near the equator, flows toward the poles above the surface of the Earth, returns to the Earths surface in the subtropics, and flows back towards the equator.

This flow of air occurs because the Sun heats air at the Earths surface near the equator. The warm air rises, creating a band of low pressure at the equator.  Once the rising air reaches the top of the troposphere at approximately 10-15 kilometers above the Earths surface, the air flows toward the north and south poles. The Hadley cell eventually returns air to the surface of the Earth in the subtropics, near 30 degrees north or south latitude.

Air near the surface flows toward the equator into the low pressure area, replacing the rising air. This area of low pressure and converging winds (air flowing together) is called the Intertropical Convergence Zone (ITCZ).  These winds are turned toward the west by the Coriolis effect and become the trade winds or the tropical easterlies.

The winds in the Southeast Pacific mainly blow from south to north. They have a strong effect on the climate in the region and worldwide. The winds in this area get their start with a major flow in the...more

The Atacama Desert is one of the driest places on Earth. The Atacama is in the country of Chile in South America. In an average year, much of this desert gets less than 1 millimeter (0.04 inch) of rain!...more