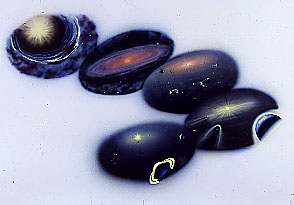 The center of the globule becomes hotter under the weight of the outer layers. At these high temperatures, the gas molecules move at high enough speeds that collisions are able to break them up into atoms. As temperatures rise even higher, the atoms lose their electrons and become ions. Pressure and temperature continue to build as fresh material is pulled in from the surrounding cloud -- a protostar is formed inside the EGG.

A protostar with too little mass never becomes a star. It becomes a brown dwarf instead and cools slowly to space, radiating away the gravitational energy from its continuing slow collapse.